I just arrived in Breckenridge for the Winter to train with the British Team, I was really excited about coming out but it all got swiftly ruined by British Airways as they lost my bags! I think it was on purpose after an argument at the airport regarding weight of my bag..... Three days later they arrived. Thankfully! Since I was first in the house I had first pick of the rooms 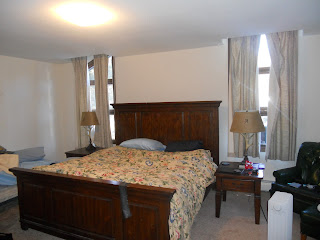 This was the Kingsize I was stuck with...... Sometimes you have got to rough it! That room has an en-suite and a balcony. I guess it isn't too bad. I get a nice view of some tree's and another house from it. I can't wait for the other guys to come out as I am stuck in the house by myself trying to find things to do!

I am going riding at Copper Mountain with Dom Harrington tomorrow. So hopefully there will be some more pictures and maybe video to follow!

Just before I came to the States I met up with Sketch and Hasta from  http://www.syndicateclothing.co.uk/ to take some photo's of a ProModel Hoody that we have been talking about! I wasn't sure if the guys were actually serious about it! But apparently they were! So we went down to a friend of ours who is a photographer to take some photo's of it! It was all a bit more serious than I expected! There was a green screen and everything! We managed to get some cool shots so everyone was happy!
So Mike(The photographer) player around with it a bit and made some humorous backgrounds! This one has to be my favourite!

Here is a link to the hoody on the Syndicate Website:                  http://syndicateclothing.bigcartel.com/product/murray-buchan-pro-model-hood-charcoal
If you use the code 'MurrayRocks' then it gets you a 25%discount! Stocks come in next week so place the order now to be sure to get one!
Hopefully soon I will have some footage for you guys!

Posted by Murray Buchan at 14:51 No comments:

I spent last weekend at Hillend in Edinburgh at BUDS. It is the British University DrySlope championships. I am not a student but two of my sponsors were sponsoring the event. http://www.syndicateclothing.co.uk/ and http://www.freezeproshop.com/. They put on a Pro Am event for the students and sponsored athletes so I managed to ride in that on the Saturday evening. Since so many skiers and snowboarders were trying to hit the jump the queue was HUGE so to save time we would drop one after the other. The only photo I managed to get of this was of me and Cameron Nicol. We both ride for Freeze Pro Shop and are both from Edinburgh. We ride a lot together so we trust each other to land and make sure that you don't land on the person in front.

At the end of every BUDS all the riders tend to do a massive train. So much similar to what Cammie and I are doing there would be a lot more people involved. This is always organised by the famous man Sketch.
I have managed to attached a little video of this train. It was the biggest one that we have ever done at Hillend so it was pretty pleasing to be in it. Watch out for me. I am the one doing the switch backflip. I am the second skier in!
Luckily I managed to win the Pro Am event. Overall it was a great weekend and I had a lot of fun. It was good to see everyone up at Hillend again and hopefully it's the same again next year!
Posted by Murray Buchan at 04:40 No comments:

Last week I managed to hook up with the guys from Syndicate in Edinburgh to film an interview for Syndicate TV. We ended up filming it in Candy bar! It was pretty cool. We chatted and Sketch showed me some magic tricks to pick up so woman! Doubt it will work! We managed to discuss a pro-model hoody as well. Some designs have been thrown together(see pic) 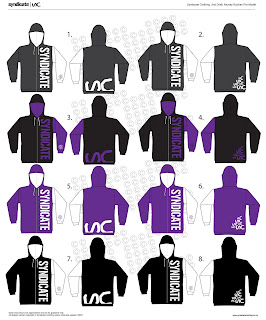 Really happy to be even discussing a hoody! So I hope it works out like the designs! Also make sure to check out   http://www.syndicatepenthouse.com/    If you like it on Facebook you can get £200 off a weeks accommodation!
http://www.facebook.com/pages/The-Syndicate-Penthouse/238167786243131
Posted by Murray Buchan at 11:52 2 comments:

Yesterday I managed to hook up with Bawbags Underwear to get some of my new stuff. It all looks amazing. You can get them at www.Bawbags.com or even www.freezeproshop.com. 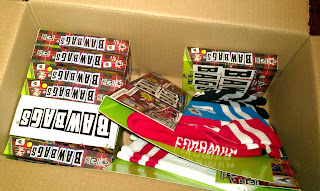 Thanks BawBags!
Posted by Murray Buchan at 03:42 No comments: