When the weather is terrible, which it has been, I try and get to the gym as much as I can! Try and keep as fit as I can and strong during the season. It keeps me busy and out of trouble. 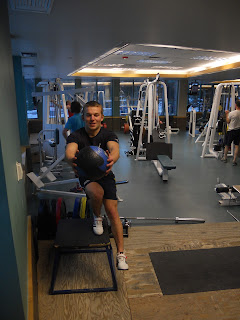 At the gym there is also a swimming pool. It tends to keep us occupied for a small amount of time! I try and spend a lot of time in the Hot tubs and on the kids slides to relax etc. Also jump into the pool. It's not the same as Ayia Napa.
The Coffin isn't up to the same standard as the one on holiday. I'll get a better one soon.
Posted by Murray Buchan at 19:31 No comments:

So the past week the Dew Tour has been on in Breckenridge. It has been killing all here as we weren't competing we had nothing to ski. I took a couple of days to rest up and hit the gym a little bit! Just took the opportunity to relax! When we did go skiing some people went to Keystone which is a resort close by, and others stayed in Breckenridge and just skied there! We realised that the people standing at the top of the lift were there to take photo's for tourists etc. And since we are tourists we thought it would be rude not to!


Today was the first day they managed to open the whole of Park Lane, well, the jumps at least. So it was a good days riding! Since it is the lead up to christmas it has started to get really really busy which means it takes longer to queue so to get around that problem we just stay up a lot later!
As you know, just before I came away to the States I did a photo shoot for Syndicate for The MBSC Hoody. It was really good fun until some idiot started clowning around! But a professional always gets the job done!
You can check out my Pro Model Hoody online by clicking HERE.
Posted by Murray Buchan at 17:53 No comments:

On Wednesday the 7th December, Rob Taylor and I did a FIS World Cup Grand Prix in Copper Mountain resort. It was the first one of the year and it went surprisingly well!
I was 4th in the running order, which was unfortunate as I only managed to get two training runs in the designated time. As frustrating as that was I managed to cope with it and do my runs in the actual competition. They weren't as clean as I had like but at least I landed which was better than some!
There was three heats throughout the day and luckily I was in the third heat which meant I got a bit of a lie in. Not much though as it takes about an hour and a half to travel from Breckenridge to Copper. There was a lot of big names in my heat such as Torin-Yater Wallace and Peter Olenick. I didn't manage to qualify but       I came 26th over all. Which I am reasonably happy with!
Big names such as Gus Kenworthy and Matt Margetts didn't even manage to qualify! It was such a strong field. A lot of unknown skiers that were amazing. So coming 26th kept me happy and the toys stayed in the pram. You can see the full results of the qualifiers by clicking Here.
I haven't managed to get a hold of a video of my run in the competition yet but I will do my best to get it. In the mean time here is one from the second days practise.
I have been trying to make a short edit of my first couple of weeks here but I have never done anything like that before so I am finding it difficult. Hopefully it turns out ok and once I have finished it I will put it straight up!
Posted by Murray Buchan at 21:40 No comments: