Last weekend I was lucky enough to compete in the Scottish Indoor Freestyle Championships in Braehead, Glasgow. It was a slope style event which I am not usually used to. I mainly ski half-pipe so I was a little out of my comfort zone.

It was probably the best set up I have ever seen in an indoor facility like that. It was amazing, so good job to the park shapers who put it all together. 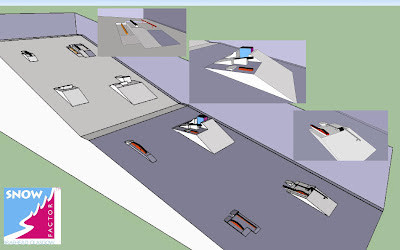 There is the slope plan for the event. It was all perfectly cut and everything was very well shaped so it made a great event.

It was an open practise so skiers and snowboarders were all in together. There was a lot of competitors. Roughly 110. So after the hours practise it boiled down to two runs only. No final because of time issues. I really like the format as it benefited me well as I tend to work well under pressure where as others don't.
I didn't manage to land my first run as well as I would have like but my second run went a lot better and managed to sneak in a win which I was extremely happy about. 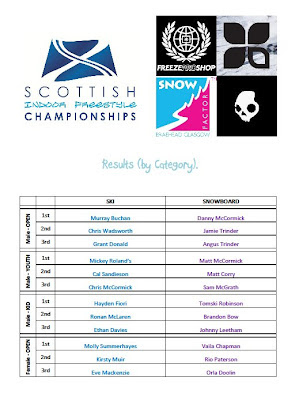 I was fairly lucky to win. It was a really tough field and thankfully I managed to come out on top. It was a great event and would like to say a massive thank you to everyone who was involved.

Next month I am hopefully away to Canada to train on an airbag so hopefully will have some video footage coming online soon.