Thursday the 31st of January I had my first contest of the season outside of Copper. It was in Park City which is just outside of Salt Lake. It was good weather for the competition. It was a simple two run qualification. Top 4 from each heat then the next 4 highest scores.

Going into practise I was really nervous as we only had half an hour which equated to 4 runs. I landed my competition run in practise which was confidence boosting.


I was originally dropping second in my heat but the person before me was late so never made his runs. So I was now the first to go. I was extremely nervous but I knew exactly what I had to do. I had done it 100 times before and chances are I will be doing it again.

Thankfully I landed my first run. It wasn't as clean as I would have liked but it took a lot of pressure off of me. I could relax and just focus for my second run.


I landed my second run. It was a lot cleaner than my first and I managed to bump up my score. I landed a bit flat on some of hits which meant it was difficult to keep my amplitude up. But I was still pleased. The speed was difficult so I think that is why I popped out the wall a bit much. Apart from that I was happy as I really focused on my grabs in my more simple tricks which I think improved my score.


My goal for the day was to get a top 30 finish in such a difficult field. So when I did manage to finish 30th I was incredibly happy. There was past X-Games gold medalists that didn't qualify. I wasn't so pleased on how my run went but since I managed to get that result without being completely happy about my run it fills me with confidence as I know I can get a better placing.

After the Copper WC I had a bit of trouble with my back. Unfortunately it meant I had to take a bit of time off. Which wasn't great as I was struggling to find things to keep me occupied apart from the gym and swimming pool.

Thankfully I had physio every day and it didn't take to long to heal. So I was back training fully again. Back on the slopes and in Woodward. I split my time between Copper and Breckenridge. 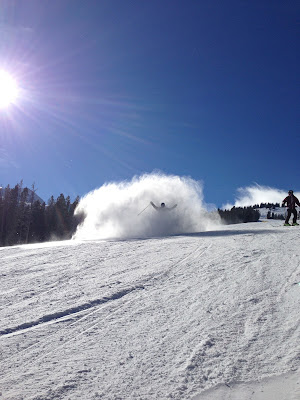 I have been working a lot with Jamie Matthew who is the new pipe coach. So we have both been making a lot of progress in the pipe. I have a lot to work on after the Copper WC. The usual program consists of heading up the mountain early and training in the pipe till about 1-2 o'clock. After that I would head home for some lunch and then either a gym session or Woodward. 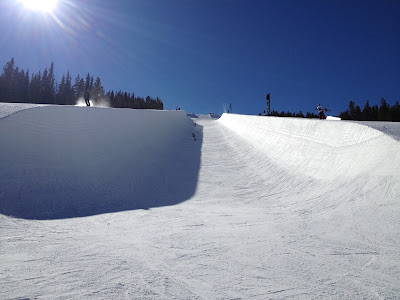 After each day in the pipe we tend to go off and have a bit of fun around the mountain. And it usually consists of backflips or frontflips. Here is a shot from the other day at the bottom of the halfpipe. 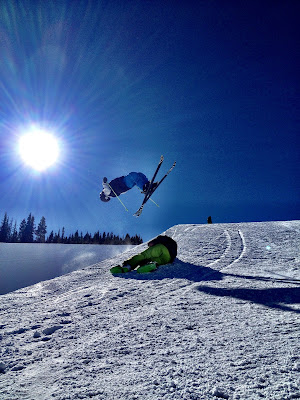 Here is my run from the World Cup at Copper Mountain. I was reasonably happy with my run and where I finished up but I still have a lot to work on as you can see from the video.

I finished up in 35th place which is a great result. But I was hoping to land a cleaner run, which is unfortunate. So I will be working hard going into the next competition in Park City on the 29th on January. I am planning on doing a couple more sessions on the airbag so I might have a new trick to put into my run by then. Fingers crossed!

Posted by Murray Buchan at 21:13 No comments:

On thursday 10th of January I took part in the first World Cup of the season. It was a very large field with some amazing riders. At first I had two days training in the halfpipe. It was split into an hour and a half each day seeing as so many people entered and there was a huge amount of competitors. 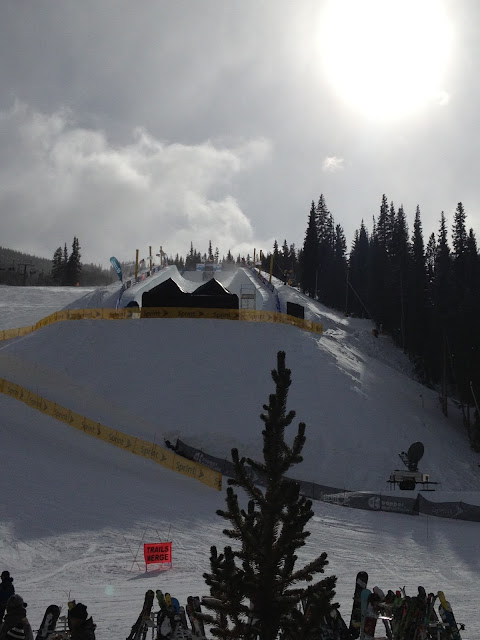 Practise was going really well even though I didn't manage to get a lot of runs in. I had spent a few weeks prior training in the same pipe. As did most people in the contest. I managed to get my run down both days which was really pleasing. They weren't perfect but it filled me with confidence knowing that I could land it when I wanted.


On the day of the comp it was really good weather. Which makes it a much more fun event as more people come and watch and also it's not as cold standing around at the top of the drop in. I had two practise runs and then the competition had started so I had to do my run. I landed my first run which took a lot of pressure off. It consisted of : Left 900 safety grab, right 540 opposite mute, left 1260, right 720 tail grab, switch left 720 mute grab and to finish my newly learnt right 900. I also managed to land my second run which was the same and then managed to bump up my score by 3 points which was great for me.

I managed to finish in the top half of the field which I was extremely pleased with as it was such tough competition.


There was only one other Brit in the competition and it was James Webb. He was skiing really well in practise but unfortunately on both runs he crashed. He landed on top of the wall and fell back into the halfpipe. It was a really bad crash and I am glad he managed to walk away without any injuries! 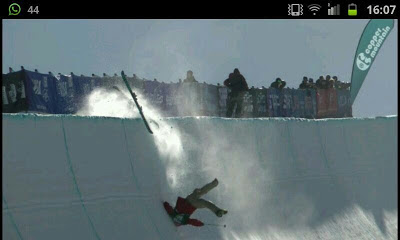 Once the competition had finished I spent the rest of the afternoon watching the other skiers who hadn't run yet. It was nerve racking as I wanted to finish top half of the field and I managed it. It was a great competition as I managed to land both my runs, up my score and achieve what I had set out to do. 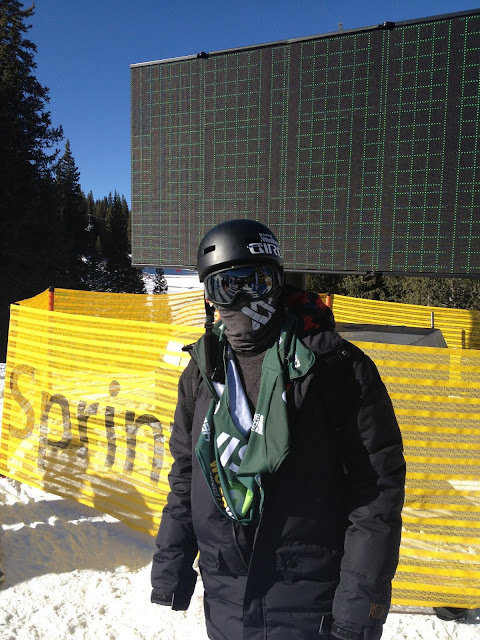 Posted by Murray Buchan at 23:19 No comments:

Filming and Training for the World Cup

After the NAC in Copper mountain I was mainly training in Keystone or Copper. The weather was really bad during the Christmas period, but this was a good thing as the resorts needed the snow. Although, with the continual snowfall it makes it difficult to train. I had a bit of time off for Christmas and New Year. It was a time to relax and try and get some motivation back for skiing.

After the New Year I started to get back into training and skiing again. A friend of mine, who is living in Breckenridge, needed to do some filming for a university project so I spent a bit of time with him. It was really good fun and interesting to film with him. I learnt a lot about the camera and lenses, which I didn't know anything about before.

Here are a couple of screen grabs from his computer whilst editing: 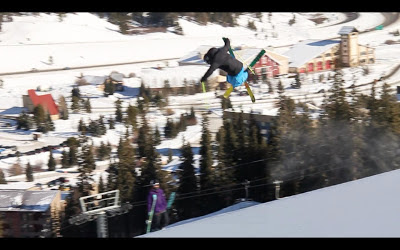 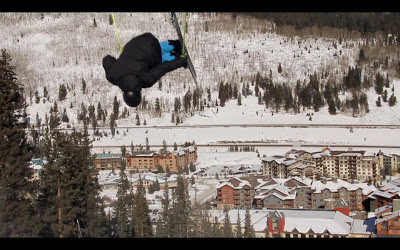 After filming with Tom I began training for the World Cup that will be held in Copper in a week. Part of the preparation for this was to head across to Vail which is about half an hour from Frisco to train on the airbag. It is very similar to the one I trained on in the Summer in Whistler.

The set up was a spine in the middle and two drop in ramps either side. The spine had two halfpipe walls cut in each side and a jump going straight over the top. It was expensive but an incredibly good set up. I went with Dom Harrington and Ben Kilner who are part of the snowboard team. I wanted to practise some doubles and also my right side 900's. The 900's were my main focus as I want them to be part of my run for the competition coming up.

I was practising double flares as well as a couple of double 1260's. I think soon I will be ready to try the double flares. But the 1260 will need some work. 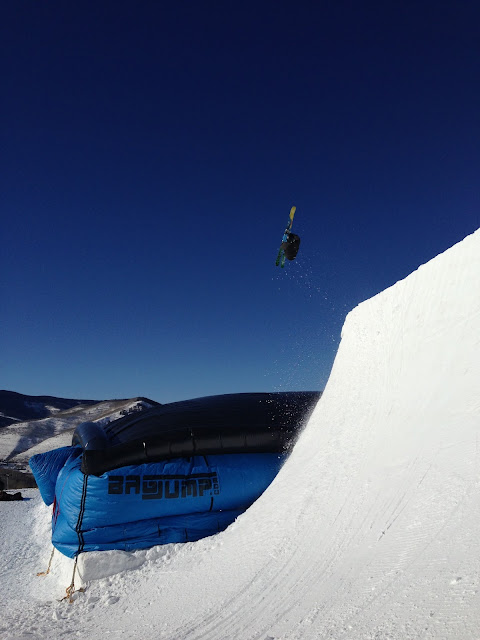 Thankfully all the practise in Vail paid off as I managed to land 11 right side 900's in a row. And one of them was in my competition run. So I was really pleased. Hopefully I can get some video footage of it to upload to here.

Sorry for the delay in posting. It will be back to normal now!
Posted by Murray Buchan at 12:47 No comments: